Friday last week, October 4, I defended my PhD thesis, and can finally call myself doctor! In my project, we used targeted metabolomics to investigate the effect of PPARα-activation and dietary composition on biomarkers of one-carbon metabolism and B-vitamin status. The project included two studies in rats, and one cohort study in patients with established cardiovascular disease. 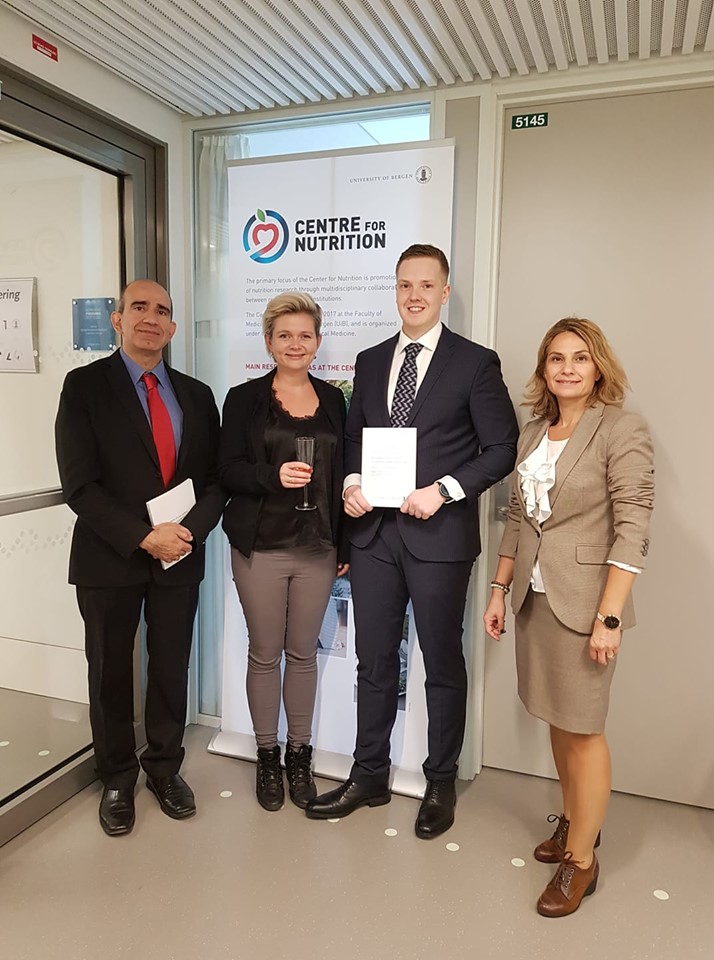 As part of the public defence, I had to give a lecture on a given topic, and the committee gave me the title Nutritional challenges related to B-vitamins. As I already have worked a lot with B-vitamins, I was very happy with this topic.

The slides from my lecture can be found here. In the lecture, I decided to focus on four examples of B-vitamin related challenges, and a short summary follows below.

Thiamin, vitamin B1, deficiency has traditionally been a major challenge, especially in southeast Asia. The problem started appearing when polishing rice became comon practice, as this removed the thiamin, and large outbreaks of BeriBeri occured. By using pigeons as model organism, it was eventually discovered that thiamin deficiency was responsible for this deficiency disease, and that the symptomas were due to the important role of thiamin in glucose metabolism and neurotransmitter synthesis. Thiamin deficiency is still a problem today, in subpopulations relying on low-thiamin staple foods such as polished rice.

Vegetarian diets and vitamin B12 status

Vegetarian and vegan diets are increasingly popular, and although these dietary patterns are associated with many health benefits, there are also some challenges. One of these challenges is ensuring an adequate B12-status. This is due to the fact that B12, in practice, is only found in food of animal origin. People following vegan diets must take a B12-supplement, but the recommendations consistently lack any comment on dose. Animal research has suggested that we need a higher dose of the supplemental cyanocobalamin form, as compared to the naturally occuring hydroxycobalamin form, to achieve the same tissue accumulation in liver, as well as active cofactor formation. Further, when B12 is taken as a single dose, the active uptake mechanisms in the intestines becomes a limiting factor, suggesting that one should consider taking a higher dose, or split the dose into more than one serving per day.

Poor folate status has been identified as a major risk factor for birth defects, of which neural tube defects are the most well known. Therefore all women of reproductive age are recommended to take a folic acid supplement. Due to low compliance, many countries have decided to fortify staple foods, such as wheat or corn, with folic acid, to ensure a better folate status in their population. This has been a success story with regard to neural tube defects incidence, but some concerns has been expressed regarding the risk of excessive intakes, and the potential for harmful effects in subgroups of the population. The major concern has been related to the progression of established cancers, where experimental research in animals have suggested that high folic acid intake may contribute to disease progression.

Genome-wide association studies have identified MTHFR, a gene encoding an enzyme in folate metabolism, as one of the genes strongest associated with hypertension risk. A common polymorphism in this gene, 677C->T, lead to reduced enzymatic function due to loss of the riboflavin cofactor. Several studies in irish populations have deminstrated that individuals with the mutant TT genotype is responsive to treatment with low-dose riboflavin supplements, which lowers blood pressure in this subgroup. With easier access to data on gene variants, this type of gene-nutrient interaction may become more frequently encountered in the future, as part of a precision nutrition approach.

My PhD thesis was called Biomarkers of One-carbon metabolism and B-vitamin status - Targeted metabolomics in rats and humans exploring the effects of PPARα-activation and dietary composition.

One-carbon metabolism is an umbrella term referring to all the metabolic pathways involved in the transfer of compounds with one carbon atom, one-carbon units. At the center of these metabolic pathways we find homocysteine, which is a well established marker of cardiovascular disease risk. The metabolism of homocysteine is connected to the folate cycle, the choline oxidation pathway and to the transsulfuration pathway, all indicated on the figure below.

My thesis can be downloaded here, and my slides from the public defence can be found here. 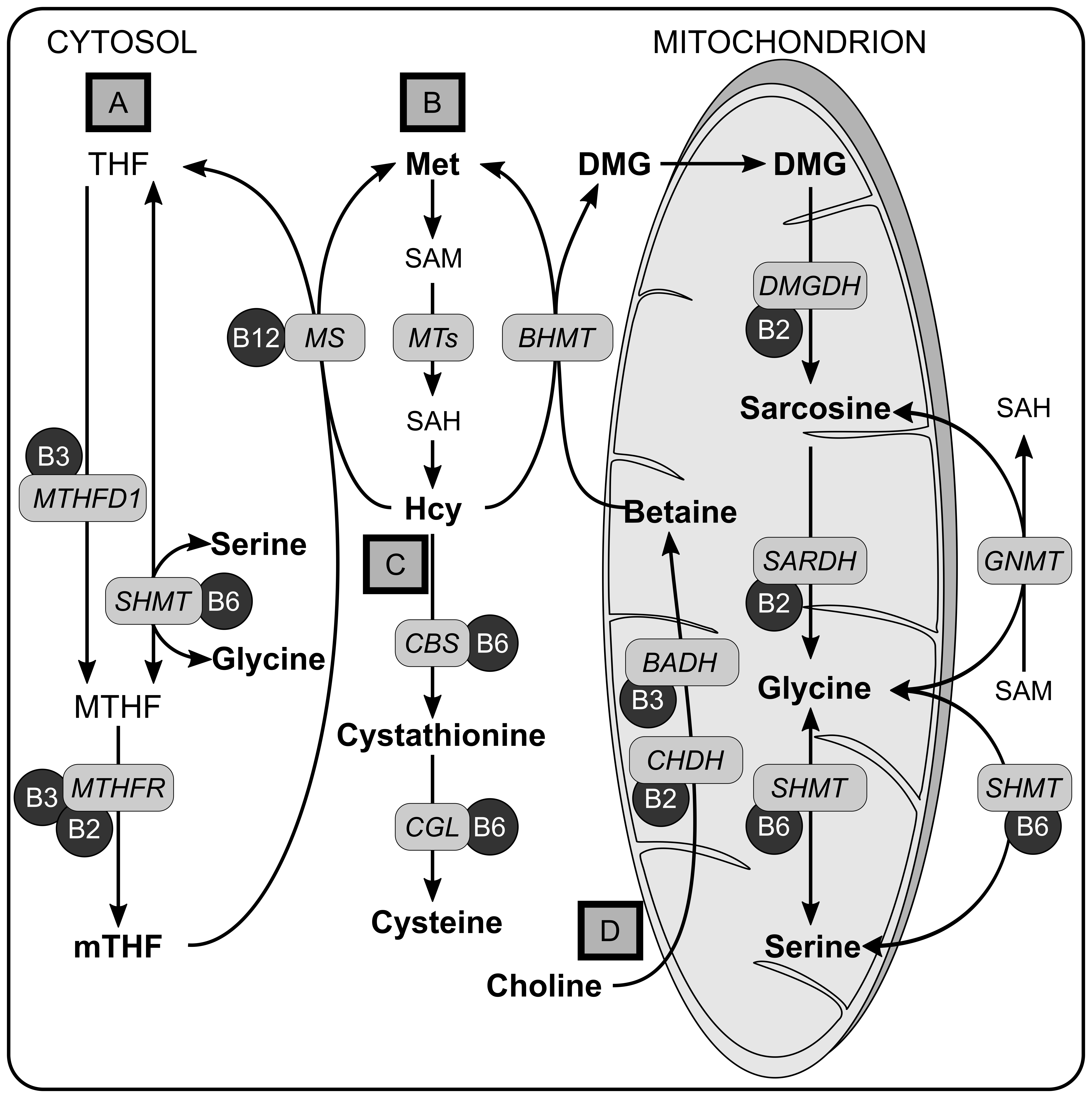 The peroxisome proliferator-activated receptor (PPAR) α is best known as a central regulator of energy metabolism, and has also been implicated in the regulation of one-carbon metabolism. Using two experimental studies in rats, we demonstrated that activating PPARα was associated with higher blood concentrations of several vitamins, including vitamin B3, B6 and the functional marker of vitamin B12 status methylmalonic acid, as well as biomarkers of the choline oxidation pathway dimethylglycine and glycine. We also observed lower concentrations of the vitamin B2-metabolite flavin mononucleotide.

As PPARα is a regulator of energy metabolism, and dietary fatty acids can activate PPARα, we wanted to explore if dietary composition was associated with these biomarkers. By using baseline data from 1928 patients with stable angina pectoris, we observed that having a higher protein intake was associated with higher concentrations of most B-vitamin markers, as well as higher methionine and lower homocysteine and glycine.

I have currently applied for a postdoc position at the Mohn Nutrition Research Laboratory, at the University of Bergen, and my next project will be to follow up the main findings from the PhD project, and investigate whether these biomarkers can contribute to the identification of subgroups who would benefit from individualized dietary advice based on their metabolic profile.

comments powered by Disqus
Next
FENS liveblog
Previous
New issue of the Norwegian Journal of Nutrition, 2019(3)