New publication on the effects of PPARα-activation

In October I defended my PhD thesis on the topic Biomarkers of one-carbon metabolism and B-vitamin status. Now, the second paper included in the project has been published in Plos One.

In this paper, we demonstrate that rats treated with a PPARα agonist had higher concentrations of several biomarkers related to plasma one-carbon metabolism and B-vitamin status. The main findings are summarized on the figure below. The study is a secondary analysis from an experiment originally investigating the effect on lipid metabolism, and our rationale for performing these analyses was our previous finding that PPAR-activation may influence these metabolic pathways. 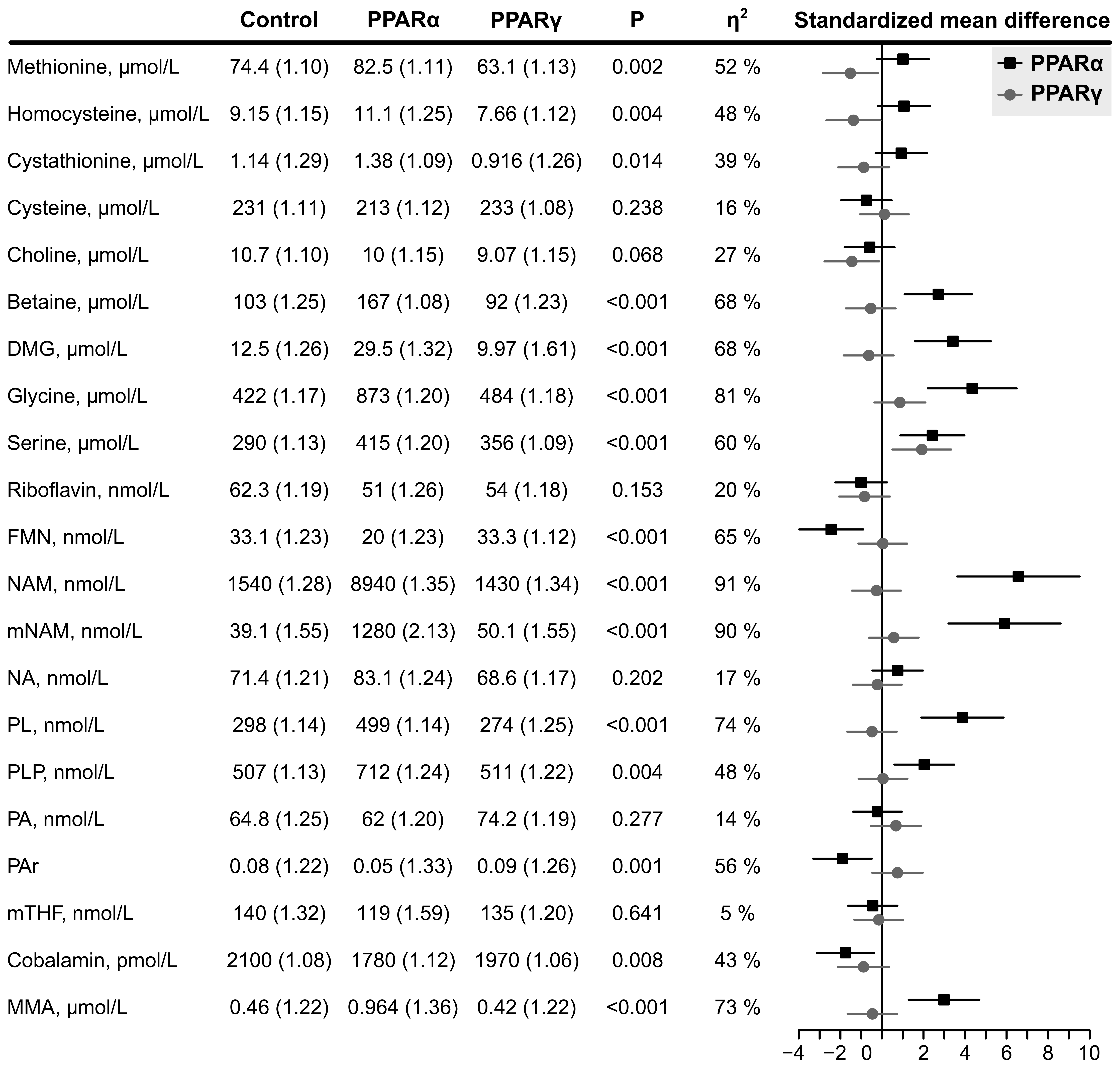 We suggest that some of these metabolites may serve as biomarkers of PPARα-activity. As PPARα is known as a central regulator of energy metabolism, such biomarkers may be of potential interest when considering personalized dietary advice.

The paper can be read in full here

Introduction: Peroxisome proliferator-activated receptors (PPARs) have been suggested to be involved in the regulation of one-carbon metabolism. Previously we have reported effects on plasma concentrations of metabolites along these pathways as well as markers of B-vitamin status in rats following treatment with a pan-PPAR agonist. Here we aimed to investigate the effect on these metabolites after specific activation of the PPARα and PPARγ subtypes.

Methods: For a period of 12 days, Male Wistar rats (n=20) were randomly allocated to receive treatment with the PPARα agonist WY-14.643 (n=6), the PPARγ agonist rosiglitazone (n=6) or placebo (n=8). The animals were sacrificed under fasting conditions, and plasma concentration of metabolites were determined. Group differences were assessed by one-way ANOVA, and planned comparisons were performed for both active treatment groups towards the control group.

Results: Treatment with a PPARα agonist was associated with increased plasma concentrations of most biomarkers, with the most pronounced differences observed for betaine, dimethylglycine, glycine, nicotinamide, methylnicotinamide, pyridoxal and methylmalonic acid. Lower levels were observed for flavin mononucleotide. Fewer associations were observed after treatment with a PPARγ agonist, and the most notable was increased plasma serine.

Conclusion: Treatment with a PPARα agonist influenced plasma concentration of one-carbon metabolites and markers of B-vitamin status. This confirms previous findings, suggesting specific involvement of PPARα in the regulation of these metabolic pathways as well as the status of closely related B-vitamins.